A few days ago, I released Goalfinger, a simple website that aims to help you decide what to do with your life.

There are three stages:

First, you enter at least 30 life goals. These can be as small or large as you like – anything, really, as long as they’re real goals of some kind. Be happy, get fit and get a haircut all count. 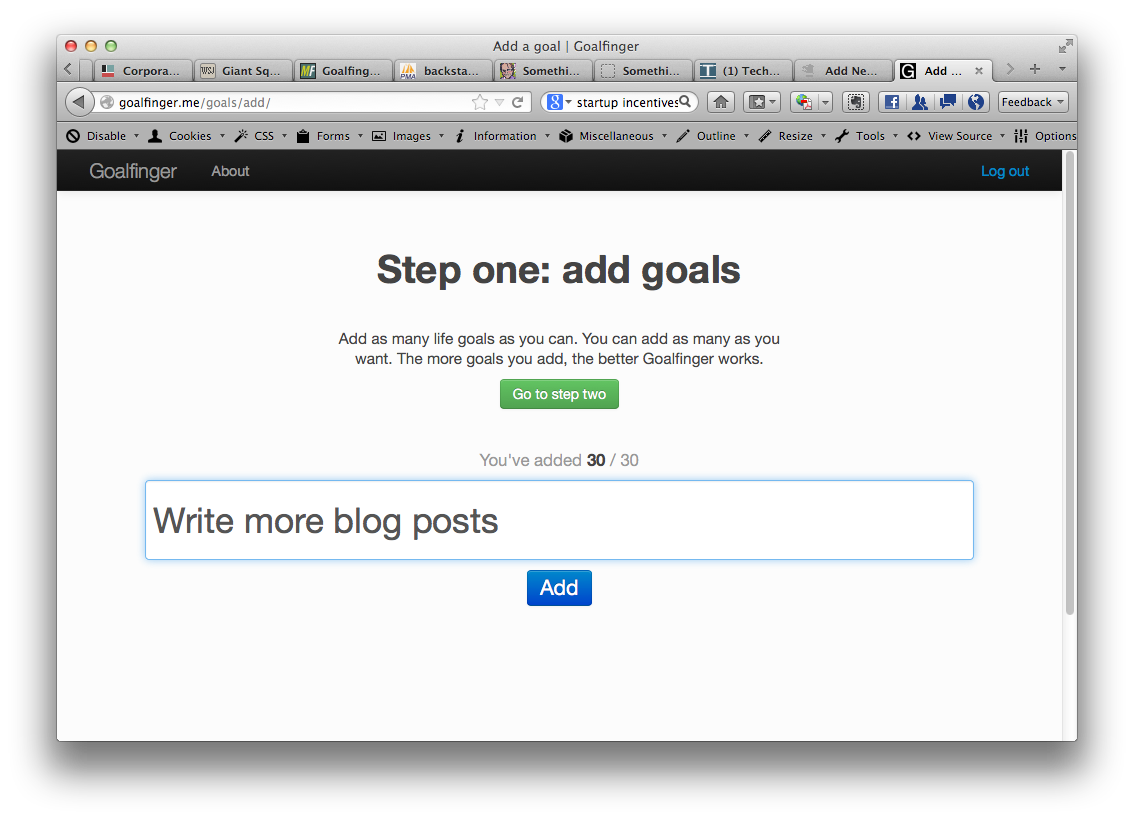 Once you’ve added enough goals, Goalfinger makes it easy to rank them, by only showing two at a time. This poses some surprisingly interesting questions: 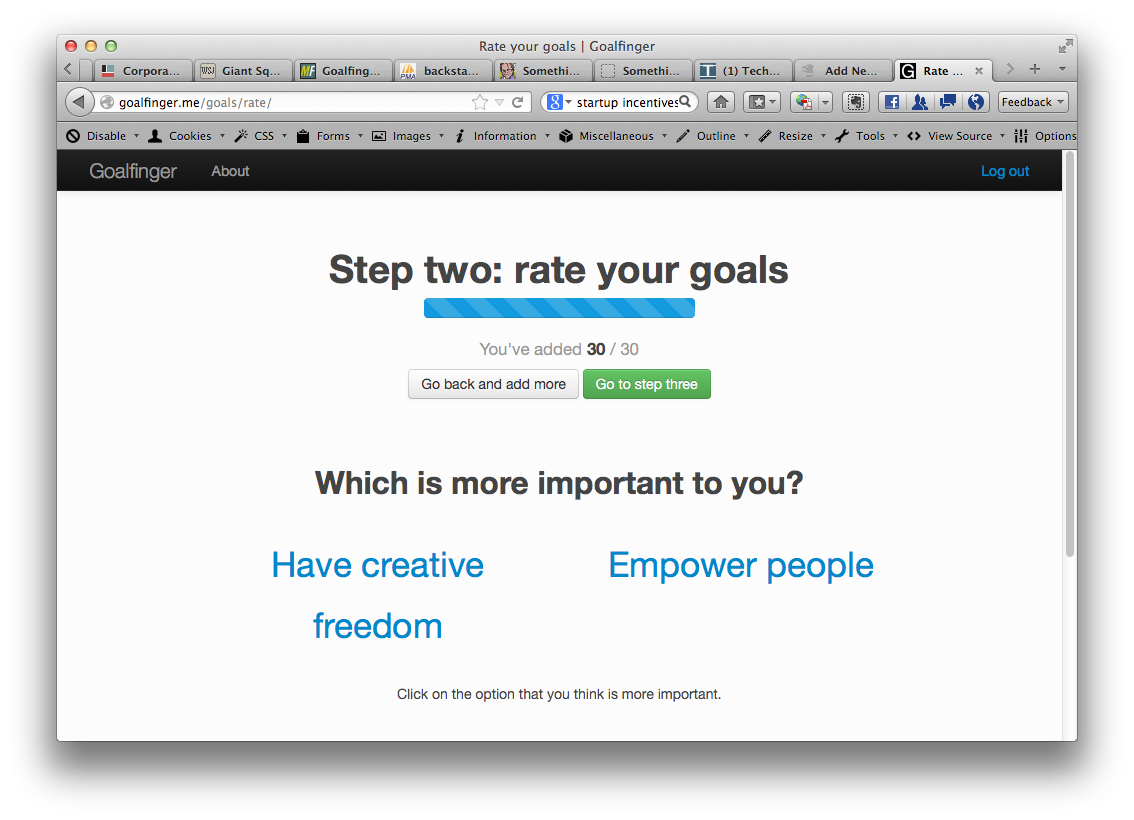 Then, finally (for now), you can review your ordered list of goals. In the future, you’ll also be able to pull them into task management software, or a simple Todo.txt file. 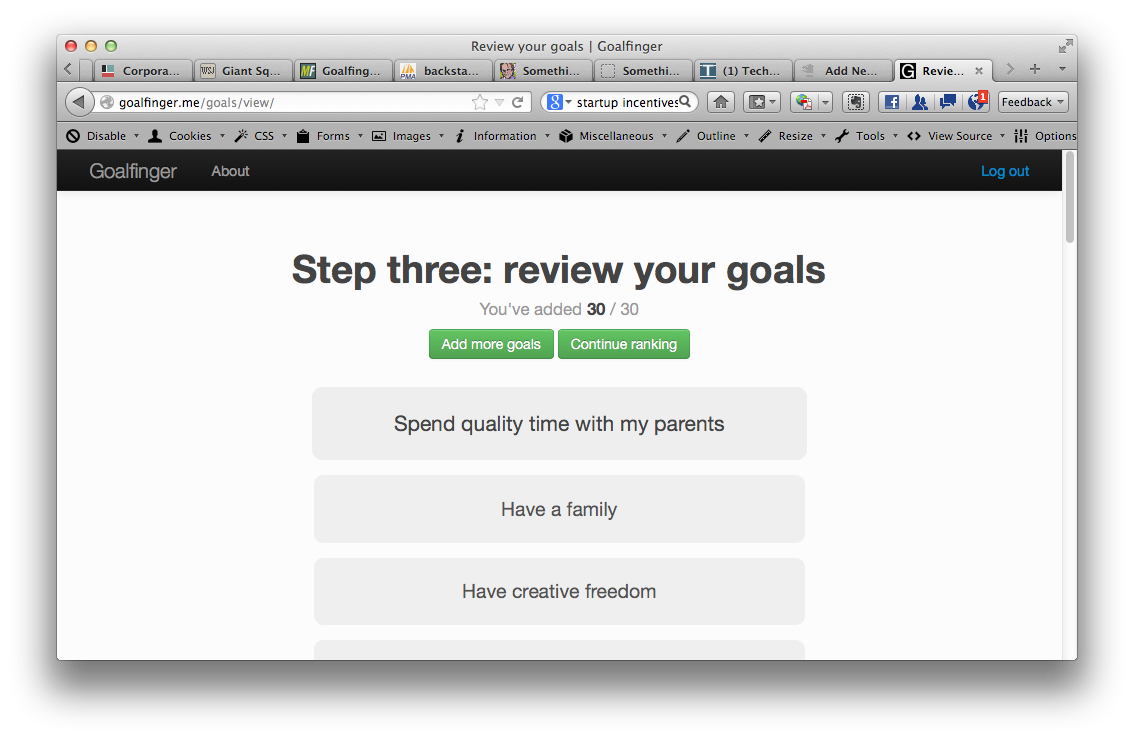 Of course, beyond scratching an itch (this is an idea I’ve had for a while), there were a few ulterior motives behind the application.

Goalfinger uses Mozilla Persona as its only authentication mechanism. I’ve been a fan of the Persona idea since its early days as BrowserID, and I wanted to see how well it worked in a real-life scenario. (I’ve also written an Elgg Persona plugin that allows you to attach Persona to your own Elgg-powered social network.) 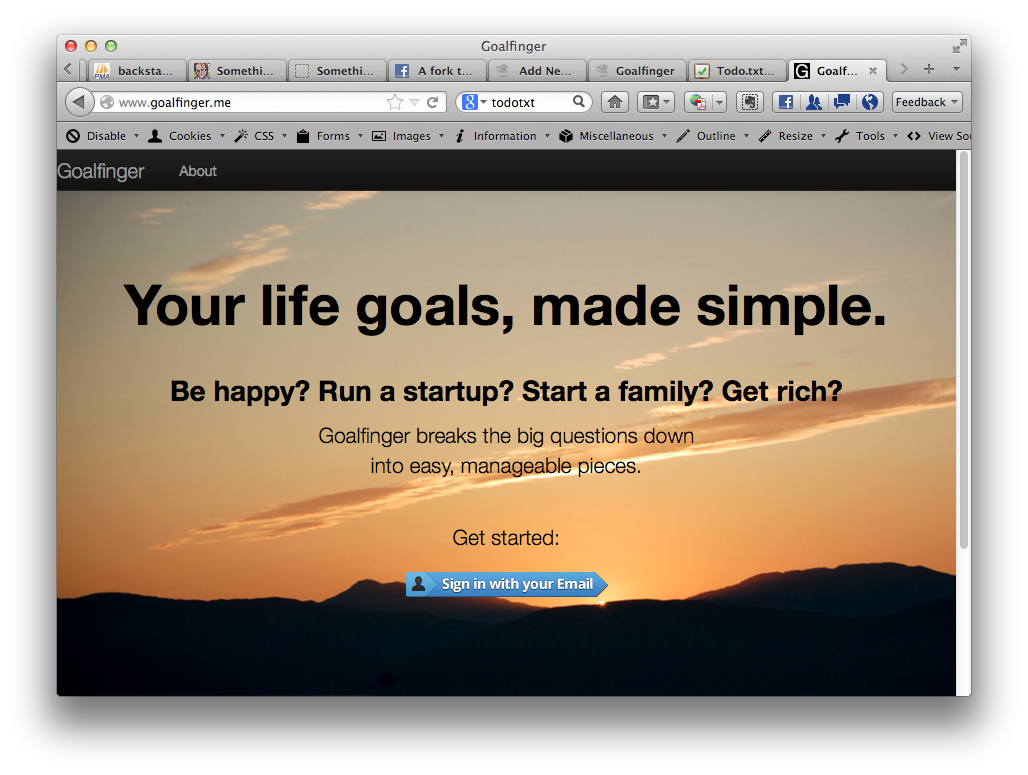 Clicking the “sign in with your email” button (one of the suggested button graphics that were created as part of the project) yields a simple login pane that will eventually be integrated with our browsers. Once users have Persona enabled, there’s no need to worry about passwords: 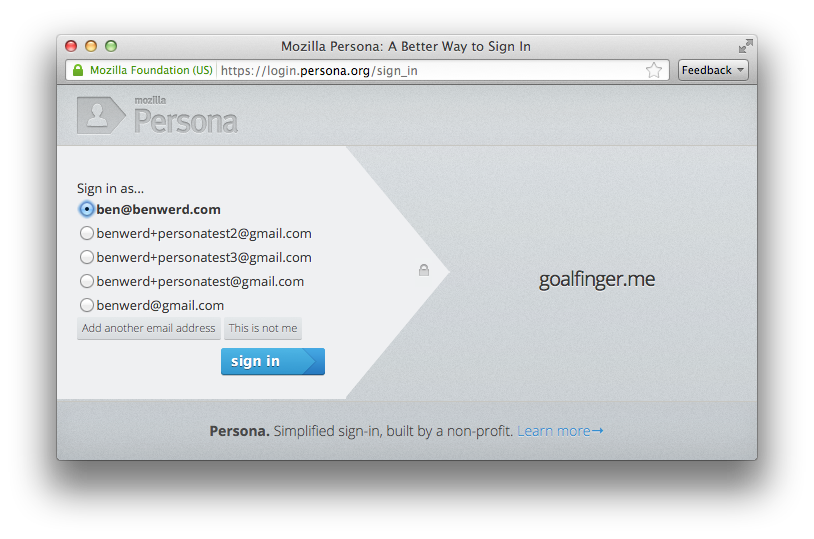 I haven’t performed statistical A/B testing on the button text, but I did receive a significant amount of anecdotal feedback suggesting that users are uncomfortable giving over their email address. Wherever I posted a link, a few people mentioned it. This is despite the fact that virtually all other forms of authentication require an email address.

This is interesting to me: one of the touted advantages of Persona over, say, OpenID is that it uses email addresses: users are already familiar with them, so the argument goes that it should be less of a stretch than having to create another identifier. But perhaps this isn’t the case; email addresses still have a degree of perceived privacy associated with them, and importantly, they can be used to send you email. Almost nobody wants more email. It’s also true that users have happily got used to new identifiers in less decentralized contexts; for example, Twitter usernames. The @username syntax enjoys a high degree of familiarity.

My suspicion – which I will test – is that simply using the phrase on the button was enough to arouse suspicion. Persona also includes a number of alternative buttons; it’s still relatively new and unheard-of outside of the web technology community, so my hypothesis is that the simple “sign in” button will be the most effective. (“Sign in with Persona” might put people off if they haven’t already encountered it.)

One of the benefits of Persona is its simplicity – coding the first version of the entire site, start to finish, took less than three hours – so I’m eager to use it if I can. As it becomes more recognizable, I think it’ll become the safer alternative to the “Log in with Facebook” button. For now, though, finding the right way to get users on board is important.

2 responses to “Goalfinger and Mozilla Persona”